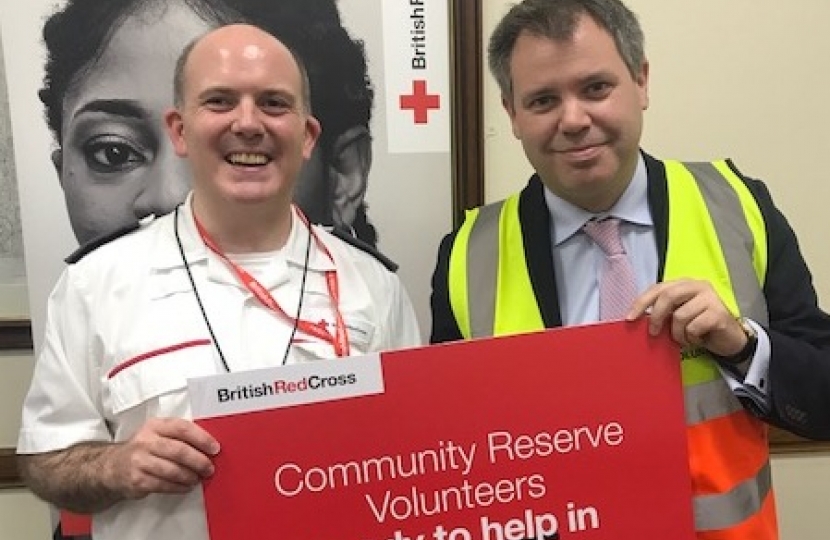 Edward has joined representatives of the British Red Cross and Aviva to meet volunteers and support their new scheme called community Reserve Volunteers, which will create a national network of people ready to help in a local emergency.

The British Red Cross responds to an emergency every four hours in the UK - from fires, to extreme weather conditions and flooding, to national emergencies including acts of terror. The drive to sign up 10,000 volunteers comes after the British Red Cross experienced one of its busiest years since WWII in 2017, assisting 9,265 people in more than 1,500 emergencies across the UK in 2017.

Edward met with British Red Cross volunteers to hear about the initiative, as well as their experiences of being deployed to incidents such as floods and fires, and their reasons for signing up. The scheme hopes to recruit 10,000 community reserve volunteers across the UK by the end of 2019. The volunteers don’t need any specialist skills and will be contacted by text if there is an emergency in their community they could help with. They will undertake vital jobs like packing food parcels, blowing up airbeds for rest centres and filling sandbags in times of flooding. Any necessary training will be given at the scene of the crisis and people can confirm their availability when they are contacted. The British Red Cross will be running emergency simulation exercises across the country to effectively practise deployment of this new team of volunteers in the coming months.

Edward said: “We have all heard of the British Red Cross, and the amazing work their teams do to support people and communities, here and abroad, at times of crisis. It was a pleasure to meet some of their fantastic staff and volunteers, and to hear about the vital, and difficult, work they have done in very challenging situations. By creating a national taskforce of community reserve volunteers the Red Cross and Aviva are seeking make the community itself a key part of responding to a local crisis. This scheme harnesses the power of our communities and individuals who want to make a difference, and have made it quick and easy to sign up."