'Send My Friend To School' campaign at Glenfield's Hall School 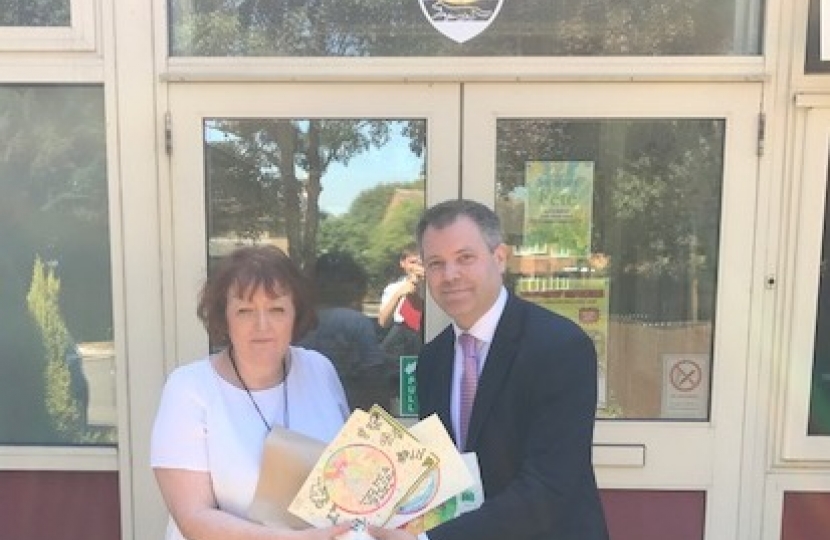 Pupils at The Hall School in Glenfield have presented Edward, their local MP, with their contributions to this years' 'Send My Friend To School' campaign, for him to pass on to the Prime Minister for them.

Every year pupils at The Hall School take part in the campaign, producing pictures and posters highlighting key requests to help every child around the world have the opportunity to go to school and get a good education. This year the campaign was focussed on the 'Safe Schools Declaration', designed to ensure schools are safe and peaceful places, where children are safe from conflict and violence. Pupils' artwork highlighting the campaign was collected together and presented to Edward by the pupils in a special School Assembly, after which some of the pupils and Headteacher, Sally Hayden, showed him around the school.

Edward will pass the pupils' work to the Prime Minister to show their support for the Declaration, which Foreign Secretary, Rt Hon Boris Johnson MP, announced the UK would sign up to in April this year.

After the visit Edward said: "As always, it was a pleasure to visit the Hall School in Glenfield, particularly in the light of its 'Good' rating by Ofsted which reflects the hard work of teachers, pupils, and parents alike.

I was delighted, as in previous years, to collect the wonderful contributions from the pupils to the 'Send My Friend to School' campaign, who had obviously put a great deal of thought and work in to their work. I will be passing them on to the Prime Minister who I know shares their, and my, view that all children around the world have the right to an education, free from violence and conflict. I was particularly impressed by the determination of the young people to do their bit to make a difference, and speak out for those less fortunate than them, on something they believe is very important."