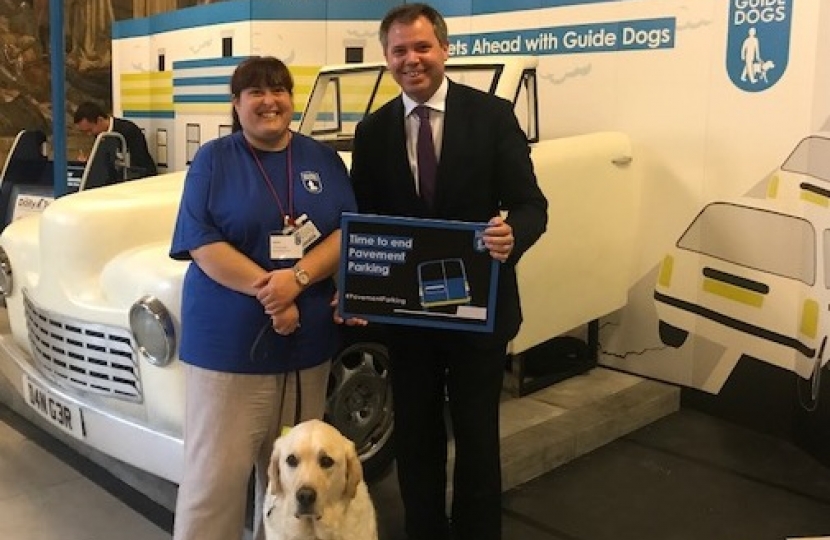 Edward has met with supporters of the charity Guide Dogs in Parliament to get a further update on the charity's campaign to tackle pavement parking, and to express his continued support for the charity's work to ensure that blind and partially-sighted people can get along a pavement free from dangerous obstructions.

He supported the Private Members Bill in the 2015-2016 Parliament, brought forward by fellow Conservative MP, Simon Hoare, to tackle the issue of pavement parking which can cause real problems for blind or partially sighted people trying to walk along a pavement, as well as for other people such as the elderly or those with prams and pushchairs. Although Mr Hoare's Bill did not pass in to law, Edward has continued to support Guide Dogs in their campaign to find a way to solve this problem.

Edward commented: “I have met with the team from Guide Dogs on a number of occasions to discuss this important issue, and it was a pleasure to meet with the team again to get a further update on their work, to talk about their campaign, and to reaffirm my support for finding a way to solve this problem. As I have said on previous occasions, pavement parking is a real problem for many people across the UK. Not only does it pose a danger to people with sight loss, it is a potentially dangerous obstacle for wheelchair and mobility scooter users as well as people with pushchairs, and I will continue to support the work of Guide Dogs.”